The Kindle version is now available! The paperback will take another month, but yes! There will be a paperback for my Kindle-less friends. Read what people are saying about Learning to Walk in Freedom (including the long versions of the reviews from the back cover):

“LEARNING TO WALK IN FREEDOM is just what is says—a guide to freedom. This booklet says more in its 80 pages than dozens of larger books I’ve read on the subject. It’s practical, field-tested, biblical and Spirit-taught. After working for over 20 years with sexually broken people I can heartily recommend this powerful little resource!” Russell Willingham, Director of New Creation Ministries and author of Breaking Free: Understanding Sexual Addiction and the Healing Power of Jesus and Relational Masks: Removing the Barriers that Keep Us Apart

“Jesus said in John 8:36, ‘So if the Son sets you free, you are truly free.’ That verse always gets a great reaction because we all desire to truly walk in freedom! Through 24 years of ministry and 40 years as a Christian I have observed that most Christians struggle to walk in the true freedom that Christ has made possible for us. In this book, Brenna Kate Simonds lays out five insightful and powerful points that will help any Christian expe- rience and walk in true freedom. I wish I had read this book earlier in my Christian life. It would have saved me years of wondering if I would ever be able to please God. I strongly recommend this book for any believer at any stage in their spiritual journey.” Jeff Jacob, Senior Pastor, Word of Life International Church, Ashburn, Virginia

“Brenna Kate makes it easy and approachable. It makes sense that her writing would be like her personality. With clarity, and honesty Brenna Kate shares both experience and truth providing an easily understood, and easily followed path in the process of living in Freedom.” Bob Hamp, LMFT, Author of Think Differently, Live Differently and Executive Pastor of Pastoral Care at Gateway Church, Southlake, TX

“Learning to Walk in Freedom is a small book that packs a mighty punch! The author throws light on the shadow that often exists between what we know to be truth and the reality of living in that truth. To know about freedom is one thing, but to live from a place of freedom requires the courage to engage with others and expose those shameful core beliefs that keep us imprisoned in wrong thinking and behaviour. Using her own journey away from lesbianism, an eating disorder, and other damaging behaviours, Brenna Kate Simonds succeeds in offering the reader opportunity to access their own expedition through life and use some of the checks and pointers as they pursue that promised abundant life in Christ.” Jeanette Howard, Director of Bethany Life Ministries and author of Out of Egypt: One Woman’s Journey Out of Lesbianism and Into the Promised Land: Beyond the Lesbian Struggle

Get your copy of Learning to Walk in Freedom today!

Cover and interior design done by Rusty and Ingrid Creative

There is a battle raging.

It’s a battle for your gifts.

It’s a battle for the unique things you have to offer the world.

We hosted a guest worship team at church a few months ago. The worship leader shared something that I’ve been thinking about since then:

“The enemy wants to destroy the call on our lives.”

Oh, friends, how I’ve felt this intimately over the past few months.

Then, I was positive that it would be done by my 2013 birthday (almost 4 months ago now).

I have lots of excuses.

As I once again try and stuff my emotions with food (something I’m quite good at, apparently)…

And God is His faithfulness keeps poking me, every month or so.

You know, my love, I still want you to finish that book.

Sometimes He’s not so gentle. In fact, He told me in December (yes, almost 9 months ago) to get over myself because the book isn’t really about me anyway. It’s about Him. It’s not about how awesome I am (because Lord literally knows that apart from Him – yeah, not much to impress anything); it’s about how awesome He is.

Well, the book is at the copy editor, and all I have left to do is write the back cover.

It has been a battle.

God has given you something unique, something particular that He wants you to offer to the world.

What is stopping you? The enemy? The negative self-talk? All the excuses about why we’ll do it later?

Here’s the thing about your gifts: they’re not for you anyway.

You may not think you have much to offer. Well, that’s a lie. That is where the battle rages because that’s exactly the position Satan wants you to stay in. Satan easily convinces us that we can’t make an impact and thus paralyzes us from doing the little (or lot) that we can do.

It’s time to declare war on the lies you believe.

“Don’t copy the behavior and customs of this world, but let God transform you into a new person by changing the way you think. Then you will learn to know God’s will for you, which is good and pleasing and perfect.” Romans 12:2 (NLT)

What is standing in the way of using your gifts today? What can you do today as a step of obedience toward God and what He might be calling you to do?

The world was heartbroken this week by another star, taken too soon.

Some people were simply annoyed by all the press this specific person was getting. What about the members of the military who were killed or injured in battle this week? What about family members who died from addiction? Were these people any less important?
But all the press made me stop and think: why?
Why was the world so swept up in the death of someone most of us never even saw in person, much less really knew?
I believe the reason we are so torn up about stars who die is that there was something amazing about them.
Amazing vocalist.
Amazing songwriter.
Amazing actor.

They had found the thing God created them to do, something I refer to as their “amazing”, and it was powerful.
They wore their amazing on their sleeve for the world to see. Their amazing was breath-taking, soul-wrenching at times, and inspiring.

1. We all have amazing in us.
That doesn’t mean we will all be famous, or well-known, or what the world would label “amazing”. It means we were created uniquely, with specific gifts that only we have to offer to the world. We can all be world-changing in whatever sphere of influence God gives us by allowing the amazing in us to surface and be developed.

“You made all the delicate, inner parts of my body

and knit me together in my mother’s womb.
Thank you for making me so wonderfully complex!
Your workmanship is marvelous—how well I know it.” Psalm 139:13-14

God knows what your amazing is because He put it in you. Don’t seek to find your amazing; rather seek God & His kingdom first “and his righteousness, and all these things will be given to you as well.” Matthew 6:33 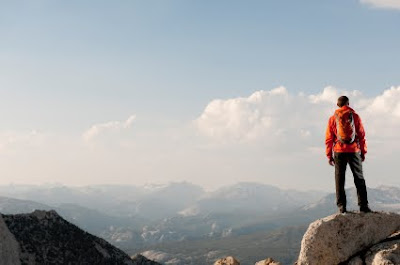 2. Ready yourself for your amazing.
We need to have a certain level of maturity and foundation of faith in order to be able to handle our amazing.
I shared some months ago in this blog post that as I searched to find God’s will for my life, sought to find my own amazing, God spoke some hard words to me: you’re not ready to receive it.
God clearly told me, in His gentle and loving way, that I did not have the foundation of faith or strength of character I needed in order to walk in the fullness of who He created me to be.
So how do we ready ourselves? If Jesus has truly given us everything we need for life & godliness, what else can we do?
We can surrender. We can remember not to think too highly OR too lowly of ourselves. We can use the example of Philippians 2, looking out for others’ interests as well as our own, and having the attitude of Jesus.
We can learn to walk in freedom.
We can follow the directive in 2 Peter 1 to add to our faith goodness, knowledge, self-control, perseverance, godliness, brotherly kindness and love.

We can gather folks around us to pray for us and help us discern God’s voice.

We can prepare ourselves so that as God reveals our amazing to us, we are ready.
3. Don’t let your amazing suffocate you.
Use your amazing for good. Remember that your amazing was given to you by God, and it needs to be continually given back to God. God is our sustainer; He alone stoops down to make you great.
Rely on God’s strength. When we stop allowing God to sustain us, very dangerous things can happen. I was reminded of this when I recently read 2 Chronicles 16, where King Asa stops relying on God for success. I prayed upon reading that that I wouldn’t get stubborn and obstinate in my old age and forget to rely on God.
Finding your amazing can lead to striving. We feel once we’ve found that thing we were created to do that we must do something to somehow feed and encourage it. Once again, we need the reminder that God alone is our sustainer. Even Paul had a thorn in his flesh to remind him that God’s grace was sufficient.
In so many lives, we have seen that the journey to one’s amazing can be suffocating.
It doesn’t have to be.
Let your amazing drive you to God. Allow it to humble you and send you minute by minute to the foot of the cross. Even when it becomes natural, almost second nature, to walk in your amazing, declare daily that apart from Jesus, you can do nothing (John 15:5).
4. Prepare to be amazed.
As I was listening to a testimony of a man’s journey to Jesus a few months ago, I was humbled to my core. The ways God is able to move took my breath away. A thought popped into my mind:
“If you are not amazed, you are not paying attention.”
God is amazing. He wants to do amazing things in you and through you and in the lives of those around you.
Pay attention, if you’re not already. Thank God for what He’s done and what He will do. Praise Him simply for who He is. Declare your gratitude for His continual working in you. Remind God of His Word; Psalm 138 says “for your promises are backed by all the honor of your name.”
The Psalm continues:

“The LORD will work out his plans for my life—
for your faithful love, O LORD, endures forever.
Don’t abandon me, for you made me.” Psalm 138:8

Ask God today to prepare you to find your amazing, if you haven’t already. Ask Him to show you your blind spots and how to use His strength in those areas. And get ready. It’s a wild ride; prepare to be amazed.

Living Unveiled is a participant in the Amazon Services LLC Associates Program, an affiliate advertising program designed to provide a means for sites to earn advertising fees by advertising and linking to Amazon.com